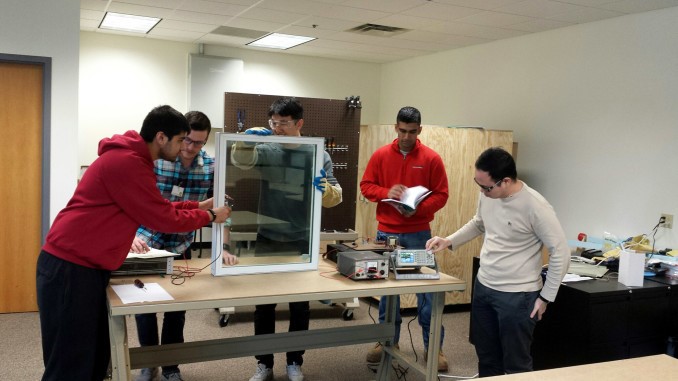 Pella Corporation is a well-known name on the Iowa State University campus. The university’s young, talented engineering students have long been actively recruited for roles as Pella interns, co-ops, and future team members. Pella also has several team members who sit on ISU advisory committees, including Larry Ehlinger, who previously served on the advisory committee at the College of Engineering.

“We began wondering how we could increasingly leverage our relationship with ISU for recruitment,” said Carrie Baird, human resources manager. “We also were interested in continuing to leverage interns and co-ops after their time at Pella.”

It was Larry who first broached the idea of opening a Pella office at the ISU Research Park. The park is located just south of the Iowa State University campus, and its purpose is to connect tenants with resources they need to profit from their research, including facilities, expertise, technology, financing, recruiting, and more. The Pella Corporation office at the park, which opened in fall 2015, serves as a location for senior capstone projects, student recruitment, and collaboration between students and Pella employees.

“Our first goal in opening the new office was to expand our brand presence on campus to additional majors,” said Kevin Gaul, engineering manager. While Pella Corporation already had a strong partnership with the College of Engineering, new products like Pella Insynctive and other advanced technologies have opened up a greater need to recruit beyond the traditional mechanical and industrial engineers to electrical, software, and robotics engineers.

The office also provides a unique opportunity to gain better access to the top-notch knowledge, expertise, and research going on at ISU. The university’s staff at the research park can put Pella in contact with professors who are doing research relevant to windows and doors.

Pella’s presence at the research park allows Pella team members to continue to work with ISU students who have been interns and co-ops even after their time working at Pella has ended. During the first semester Pella’s office was open, former interns and co-ops continued with work they’d begun while at Pella, including materials testing and formulating potential improvements to standards and specifications.

One of the key purposes the space will serve for students is as home base for their senior capstone projects, which many engineering departments require as the culmination of a student’s studies at ISU. During the fall 2015 semester, two teams of students worked on capstone projects using the resources of the Pella office. The focus of the projects were acoustic windows, also known as active noise-cancelling windows. In the coming semester, Pella expects to host six teams of students, working on three new projects.

Students who work with the office have access to one of Pella’s technical engineers, who works closely with the students, answering questions and offering advice. One of the biggest draws for students, however, is the availability of Pella’s equipment, and perhaps even more importantly, space. “Having the space and equipment makes it more appealing to work with Pella,” said Carrie. “In the Pella office, they can set up their project or experiment and come back later to have it exactly as it was. In their classrooms, they might have to take it down each day because there just isn’t enough room.”

“Our two teams last semester were very grateful to have this space,” added Kevin. “That was our primary goal—for students to have a great experience. A secondary goal was for Pella to learn something from their projects.

“The research park is an exciting place to be right now,” he continued. “It’s growing in leaps and bounds. We’re excited to see where it could take us in the future.”